Lore Reading Club: Klaw, the Murderous Master of Sound (May 2020)

Hi Readers! In addition to the small snippets of Lore reading we discuss on the podcast I wanted to write up some of the research I do into Marvel comics so you can feel free to read along or get updates by following this post. I plan to update this blog-post throughout the month of May as I read more and more stories involving the Klaw. #KlawYourWayThroughMay with me and join in on the comic fun. Every issue I read and talk about is available on Marvel Unlimited!

In this first segment I'll be reading a few comics from Klaw's original appearances in the comics. Starting with Fantastic Four (vol. 1) #53 & #56. Note, readers may want to read Fantastic Four #52 as well for the first appearance of Black Panther! Fantastic Four #53 finds Marvel's first family in Wakanda as guests of King T'Challa the Black Panther. He retells a story from his childhood when the Ulysses Klaw attacked Wakanda for their Vibranium. Young T'Challa saw his father murdered at the hands of Klaw who brings along sonic blaster guns in his pursuit of Vibranium. One cool tidbit, Klaw uses his sound transducers to create simulations of creatures made of pure sound! The Human Torches flames do nothing to stop these sound creatures a power or feature we don't see in Marvel Champions! As typical in these classic comics, the good guys foil Ulysses by the end of the issue. Wakanda is saved and the Fantastic Four return to the Baxter building!

Klaw however has more nefarious plans. After his defeat he enters his  sound transformer to become a true embodiment of sound! This is how he gets his classic red-tones look and becomes more than just a crazed mad-scientist, and more of a mercenary to challenge heroes across the globe! In Fantastic Four #56 the Klaw returns to seek revenge on the Baxter Building. He has his classic get-up and uses some brute force soundwave attacks to beat down on the family. In the end, he is foiled with the use of some Vibranium on loan from the Black Panther. It's fitting that in Marvel Champions Klaw's worst cards (his upgrades) are removable easily with the use of Vibranium from Black Panther's hero kit (good theme win FFG)! I love these classic issues, they show fictional technology like tiny world wide communication devices (aka cell phones) as if they could never exist. Now we literally read these comics on a cell phone! The times have changed... and so has Klaw! 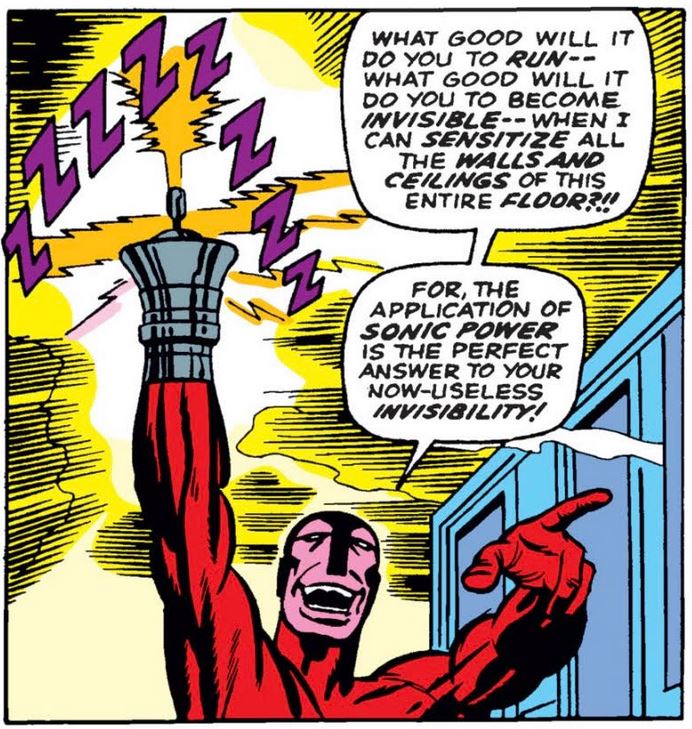 Next, I wanted to touch on a few issues that relate to the Marvel Champions core set cards. In issues Avengers (vol. 1) #54-55 Klaw works with a mysterious overlord, the Crimson Cowl. Hey! That's a card from Ultron's set... anyways he's a member of the 2nd iteration of the Masters of Evil, fitting as that is his recommended modular set. He works alongside Melter, Whirlwind, Radioactive Man and more to assault the Avenger's Mansion. Avengers #54 follows the butler Jarvis who betrays his employers for some quick cash. Unfortunately, this information falls into the lab of the new Masters of Evil, lead by the Crimson Cowl. The Cowl's "true" identity is revealed at the end of the issue and it's too big to spoil (Marvel Champions fans it won't be who you expect!) In Avengers #55 you'll find out who is really pulling the strings! Well, the Avenger's take card of the new Masters of Evil, like it's a standard mode game, but I'm sure they'll be back to attack the mansion again! But, the Masters of Evil isn't the only super-villain team Klaw has been on! Just like in Marvel Champions, Klaw likes to be in charge but constantly works with other villains. What a team-player! 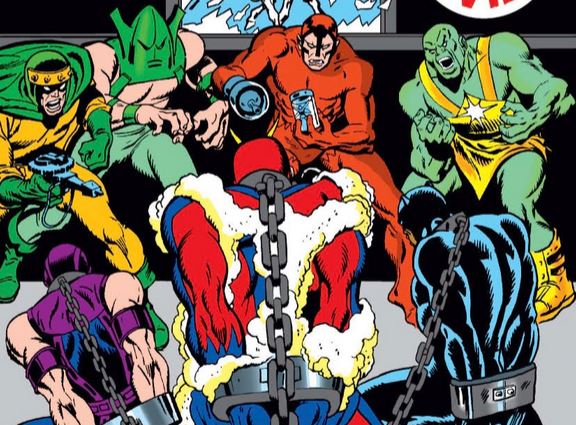 While the original Frightful Four debuted before Klaw he joined multiple iterations of the team. Always recruited by another super-villain, the Wizard. In Fantastic Four #326 the Wizard assembles another iteration of the Frightful Four including: himself, Klaw, Hydro-Man, and Titania. Sadly only Titantia made it into Marvel Champions and as a Nemesis for She-Hulk. But Klaw's role in the Frightful Four is still very interesting. During this arc they assault the four freedoms plaza. Somehow Klaw always gets roped in when attacking a heroes home base. Not a great plan. Like typical super-villain teams there's a lot of infighting. Klaw uses his sound creature powers again to attack the Thing who remarkably turns into a human after an explosion! The arc lasts only two issues which is short for a 80's affair but it's a good read with some major shake-ups for our heroes. We even see a truly villanois side of Klaw when he threatens Reed and Sue's children. Of course - he is taken out by the end of the issue like we are playing Bomb Scare Standard mode but this arc encapsulates Klaw's first inclusion in the Frightful Four. 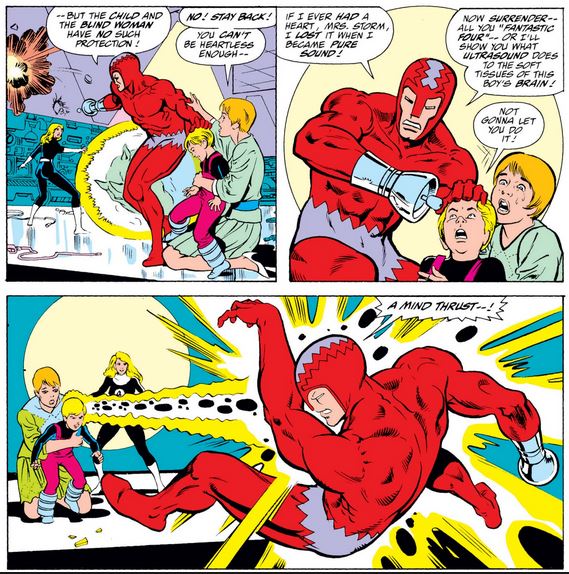 Next, I read a more modern version of the Frightful Four from the pages of Superior Carnage (2012-2013). This is a five issue miniseries around the time of Superior Spider-Man so you'll catch some awesome Doc Ock hero action and characters like Agent Venom. This arc actually features the art from Klaw's villain card at the end of issue #1. The Wizard, always plotting, plans to assemble yet another rendition of the Frightful Four. The issue covers his recruitment of Carnage the deadly symbiote. Carnage almost kills the Wizard who is saved on the final pages by none other than the immortal Klaw! 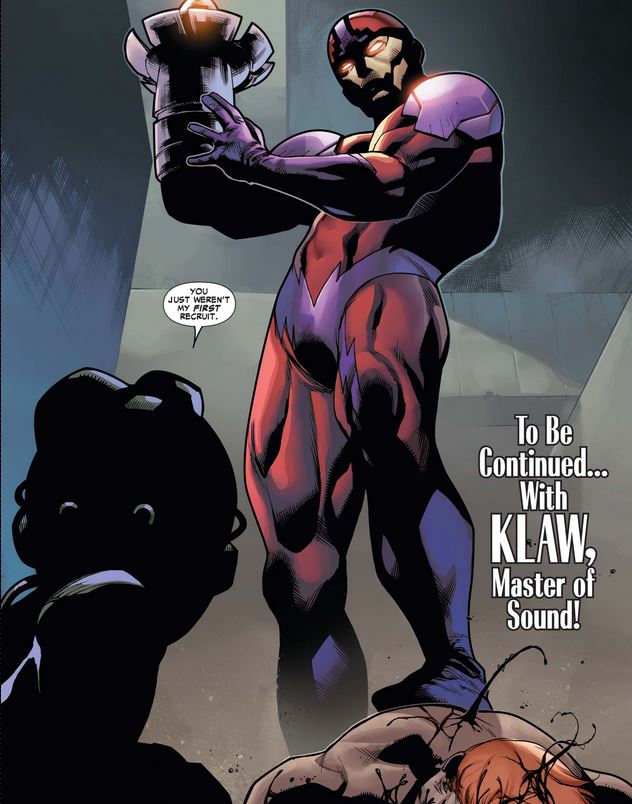 Issue #2 covers some of the history between the Klaw and the Wizard. This is where we get some insight into the Immortal Klaw! The Wizard has resurrected, rebuilt, and clone Klaw multiple times. This rendition is basically controlled by the Wizard! Pretty villainous and makes me wonder what a Wizard scenario with a Klaw minion would be like! I don't want to give too much away but knowing that the Wizard and Klaw are trying to control Carnage... well let's just say it's a good thing the Klaw is immortal. Next week we'll round out the Klaw lore reading with some modern stories involve the Klaw and his greatest foe. The Black Panther! 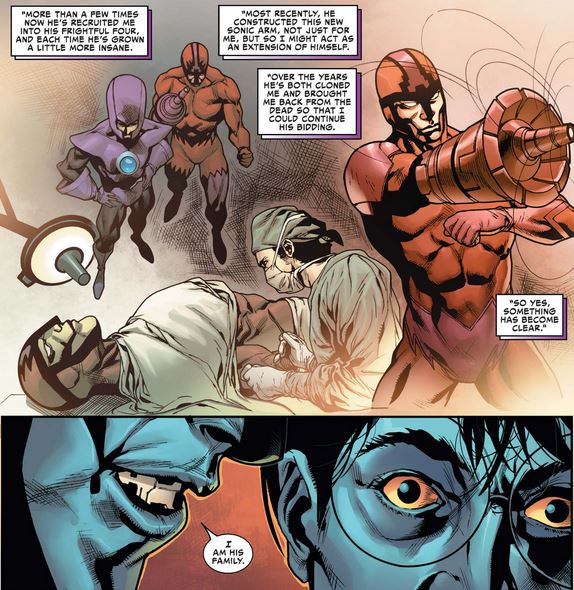 After the events of Superior Carnage the forever resurrecting Klaw returns again. This week I wanted to discuss Black Panther (2016) issues #166-#171. The previous issue was #18 but Marvel swapped the title back to some sort of legacy numbering and with it they brought back on of T'Challa's greated foes, Klaw!. The cover of the issue has an depicts and awesome battle between Klaw and the Panther. This first issue recalls a story of Klaw's past as he remembers his sister and overviews his powers. His power has been growing and he fancies himself a god! He displays some cool abilities like traveling by sound wave! 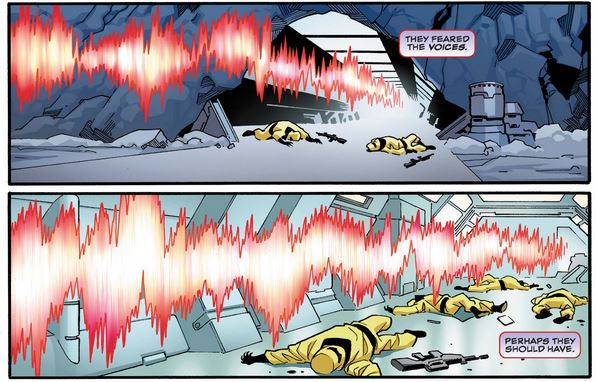 The entire opening issue is a Klaw monologue about his sister and at the end we find out he is trying to bring her back as a solid-sound body just like himself! If you read these issues you'll find a ton of the Klaw art from the game. We'll be covering this art in a Panel Art issue soon so stay tuned! Issue #167 is more Black Panther focused and he discusses the loss of the Wakanda gods and suspect Klaw is meddling in Wakanda's affairs yet again. There's a pretty interesting discussion about Klaw's constructs and how they have evolved to become more powerful. Klaw next appears in issue #169 when Klaw finally reunites with his sister only to have the laboratory destroyed as she is brought back - and she vanishes never to be seen (or heard) again. 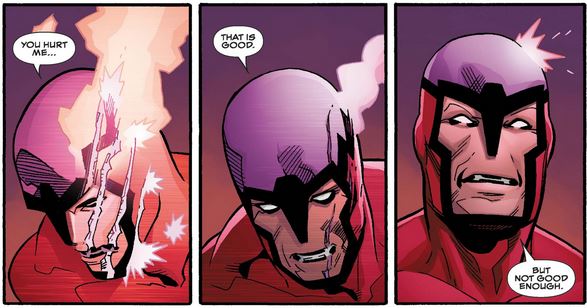 The story arc concludes in issue #171 an epic showdown between the Black Panther and Klaw but has a ton of guest appearances along the way including:

And those are just the good guys! In the end Klaw is defeated - he finally gets his greatest desire - Vibranium - but it was an unstable lab created counterfiiot. The stability dissolves Klaw into solid pieces of sound - a brutal but fitting end for Klaw --- for now? 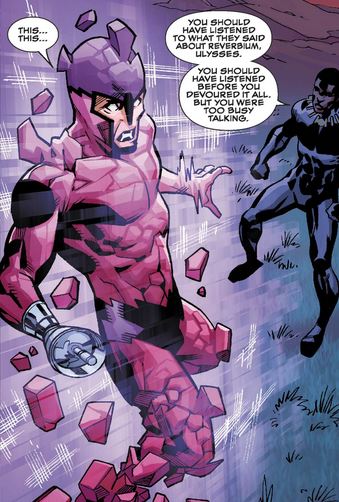