Greetings SHIELD Agents! This is the first article in a series of new-player articles, aimed to get beginner players get up to speed on the game - Marvel Champions! We'll be kicking things off with our first training session:

While we will cover a range of topics we wanted provide a good resource for players looking to play their first game. Fantasy Flight Games really provided a nice gift with Marvel Champions. When you open your brand new core-set you'll find a beginning scenario is prepackaged and ready for you to play. The villain with be the Rhino who can face off against two players with pre-built decks: Spider-Man with the Justice aspect and Captain Marvel with the Aggression aspect. We'll talk more about aspects and heroes in a bit. You may have noticed there were two rule books in the box -- what gives? They are not two sets of rules one is a Learn to Play guide. We recommend giving this a read before your first game. The other is the Rules Reference Guide (RRG)- as the title tells you this can be used as a reference of glossary for a number of game questions. Note: Fantasy Flight Games regularly updates this guide on their website so consult there for the latest update which may include: errata, further clarifications, and frequently asked questions! Once you've read the Learn to Play this guide can serve as a quick reminder and get you through your first turn before you are off on your own heroic way! Let's get started with game set-up! First gather all the tokens where both players can reach them - this guide is written for a 2-player game but you can play with anything from 1-4 players!

Set-up for this game is extremely simple. You can find detailed set-up instructions in Appendix II of the RRG but we'll go over it here as well. First players will select their heroes

Your board state should look something like this (tokens and dials not pictured). 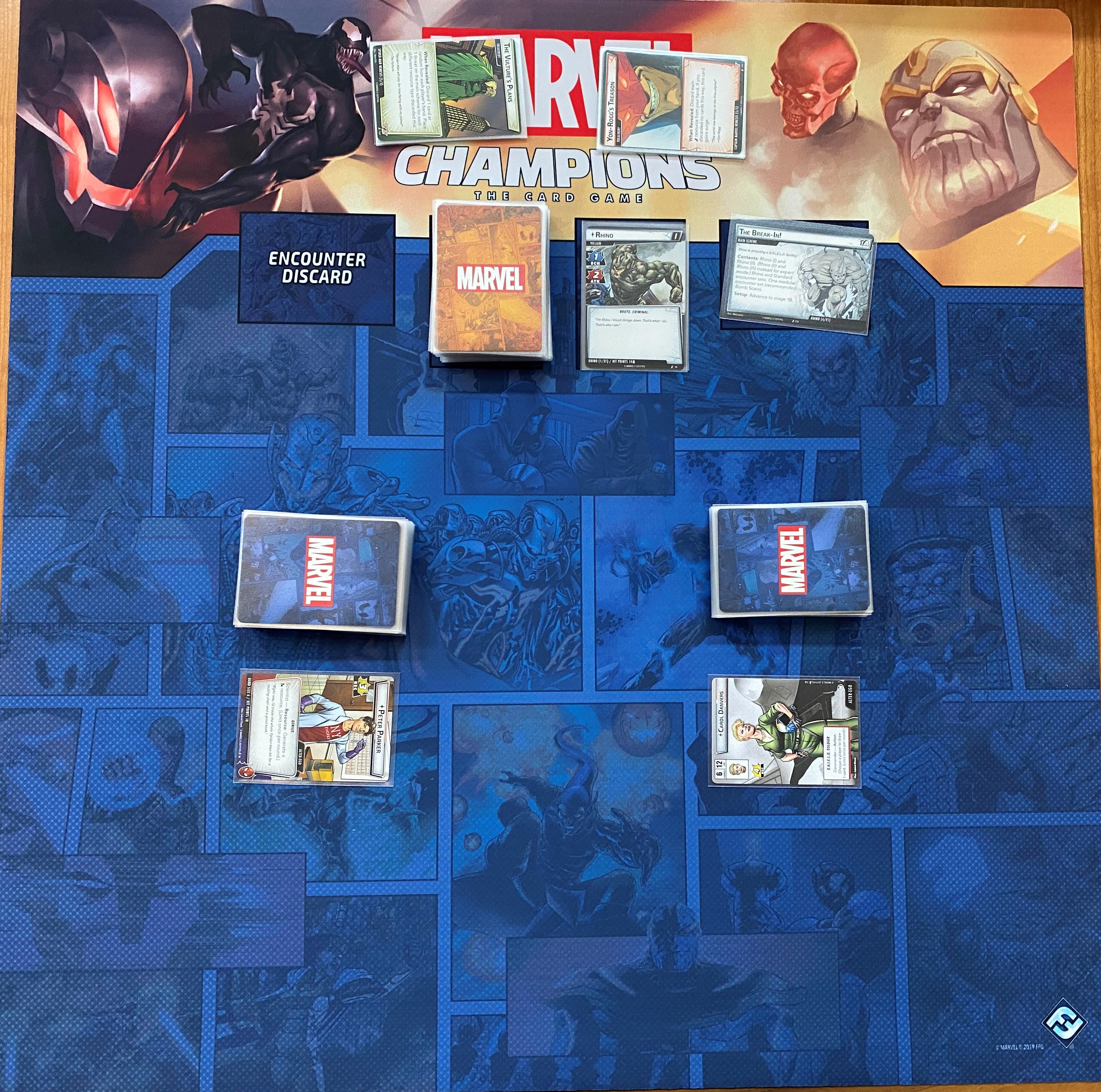 You are now set-up and ready to run your first game! So who goes first? You do - of course!

Let's talk about your first turn. Starting with the first player each player will take a turn. On a heroes turn you can take several actions. Take as many actions as you want until you declare the end of your turn.

Usually in your first game you'll want to get right to work playing cards. The first thing to note is several cards say either Hero action or Alter Ego action. You character will have to be in the right form to take an action. Two examples are shown below. As the Spider-Man player you will need to be in Hero Form to perform a Swinging Web Kick, but you'll need to be in Alter Ego Form to heal up using Aunt May. To pay for cards you'll need to pay resources. In Marvel Champions every card also acts as a resource, the number of icons in the bottom left are how many resources the card generates. Most cards generate 1 resource but a few generate two so pay attention to the card and the text on cards like Power of Justice. Ideally each turn you will play or pay with every card in your hand and after everyone's turn is complete you will replenish your hand. So burning through your hand means you'll see more cards in your deck!

There are several card types in Marvel Champions:

For your first game we suggest you try to build your board state by playing Upgrades, Supports and Allies - then use events to smash the Rhino! An ideal first turn often includes some ramp and set-up for the future. As Spider-Man playing a Web-Shooter is a great way to invest in the future. You can even use Peter's Genius ability to play it before you flip. With Captain Marvel your ramp is inherrent in your

Alter Ego ability. If you happen to draw Alpha Flight Station or Avengers Mansion they are great first turn choices for Carol.

One thing to remember during the first turn is you will ready before the villain acts during the villain phase. So there is no reason to not use your basic abilities. We recommend during their turns both players flip to hero form and exhaust to attack Rhino (there's no threat on his scheme to thwart yet). You've probably picked that up in the Learn to Play guide but Identity cards have 4 basic abilities.

Once both players have completed their first turn the hero phase ends! You'll want to ready all your cards in play and draw up to the hand size designated on your identity card. Note, for both Carol and Spidey their hand size is smaller in hero form! This means in future turns if you want more cards you will have to flip back to Alter Ego form. Now, it's time for Rhino the charge in and take control of the game for a moment.

The villain phase is broken into 5 steps

1. Place threat indicated in the main scheme's acceleration field onto the scheme. Note, if any acceleration icons or tokens were present the threat would go up even more. If the threat reaches it's threshold of 7 per player Rhino wins the game! Rhino's scheme goes up each turn by 1 threat per player- so with no bonus effects for Rhino and no removal by the heroes you'll have 7 turns to defeat him. 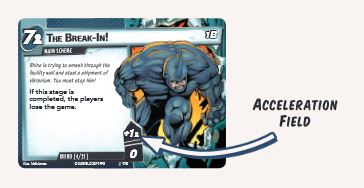 2. The villain will activate once per player.

4. In player order, each player reveals their hazard card and resolves the effects. If the card is:

5. The first player token is now placed to the next clockwise player and the hero phase can begin again.

Game rounds will continue as heroes take their turn, then Rhino takes his turn. If you defeat Rhino's Stage 1 card you'll need to bring his Stage 2 card into play, resolve any when revealed effects and defeat him all over again. Most villains are stronger later in the game (just like heroes) so Rhino is going to punch harder. Once Rhino has been defeated twice the heroes win the game. Heroes will lose the game if all heroes are defeated (hit points are reduced to zero) or if Rhino completes his scheme! Complete your first game as you learn all about Spider-Man and Captain Marvel's decks. Below we've included a list of tips and commonly missed rules for players first game

This concludes our first SHIELD Training session. Let us know how your first game went and check back or subscribe to be alerted of upcoming articles of interest to new and experienced players! If you are an experienced player and read this far... let us know a common rules mistake you experienced in your first game. We'll add them to the list above! KennedyHawk recently played through the starter game solo you can check out the video below!

We have a whole slew of topics we want to cover in future training you can check out the entire series to date below - as always - thanks for reading!